Sepideh Gholian Released on the Bail 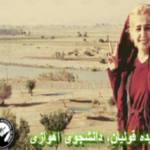 According to the report of Human Rights Activists News Agency (HRANA), Sepideh Gholian (Ghoolian), senior veterinary student of Ahvaz was released on a bail of 2 billion IRR, on March 1st. END_OF_DOCUMENT_TOKEN_TO_BE_REPLACED

A Student Arrested in Ahvaz

HRANA News Agency – Sepideh Gholian, a student from Ahvaz, was arrested by the security forces, at his father’s house and was taken to an unknown location.

According to the report of Human Rights Activists News Agency in Iran (HRANA), the security forces arrested Sepideh Gholian, born in 1995, a fourth semester student of veterinary from Ahvaz and resident of this city at her father’s house and took her to an unknown location on February 24, 2017. END_OF_DOCUMENT_TOKEN_TO_BE_REPLACED