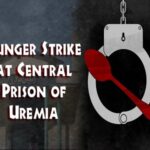 According to the report of Human Rights Activists News Agency in Iran (HRANA), out of 26 striking prisoners who are at 33rd day of their hunger strike, at least 13 are in critical health condition. According to the reports, on December 21st general health of two prisoners “Ali Ahmad Soleymani and Khazar Rasoulizadeh” have deteriorated and started seeing blood spots in their vomit. Although they have been sent to the prison clinic, they refused to be injected with fluids and returned to the general ward later. END_OF_DOCUMENT_TOKEN_TO_BE_REPLACED 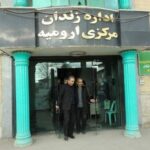 According to the report of Human Rights Activists News Agency (HRANA), on Thursday 20th November, prisoners in ward 12 of central prison of Uremia to protest against the lack of “crime based wards’ separation” role and the problems with some primary facilities, have gone on unlimited hunger strike, but still their demands are denied. END_OF_DOCUMENT_TOKEN_TO_BE_REPLACED

According to the report of Human Rights Activists News Agency (HRANA), on Saturday, 6th December, Intelligence Ministry representative summoned Osman Mostafapour, one of the prisoners in the prison of Uremia to the security office and asked him to stop hunger strike by disport from the strikers. END_OF_DOCUMENT_TOKEN_TO_BE_REPLACED

HRANA News Agency – Even 16 days after the hunger strike of 28 Political Prisoners at Urmieh Central Prison (Darya) and concerning health condition of some strikers, the prison authorities are committed to ignore their demands.

According to the report of Human Rights Activists News Agency (HRANA), since 20 November 2014, 29 Political Prisoners incarcerated at Ward 12 of Urmieh Central Prison have started an indefinite hunger strike in protest at the neglect of Separation of Crimes and other issues with their union. During the 9th day of their hunger strike “Mansour Around” a death row prisoner was suddenly exiled to Mahabad Prison. END_OF_DOCUMENT_TOKEN_TO_BE_REPLACED

HRANA News Agency – The hunger strike of 29 political prisoners in central prison of Uremia has continued for its ninth day and one prisoner was transferred to Mahabad prison.

According to Human Rights Activists News Agency (HRANA), prison authorities transferred Mansour Arvand, the prisoner who has sentenced to death and is on hunger strike along with 28 other political prisoners, to Mahabad without any previous note, on Saturday November 29. This day was the day that political prisoners of section number 12 could have visitors. END_OF_DOCUMENT_TOKEN_TO_BE_REPLACED