On Saturday, August 6 and Sunday, August 7, at least 8 protests took place in Iran.

The workers of the Regional Electricity Organization in Hormozgan, Khuzestan and East Azerbaijan Provinces gathered before this organization building in each city. According to these protestors, six months after the beginning of the year, the company has not yet announced how much their salaries will increase. 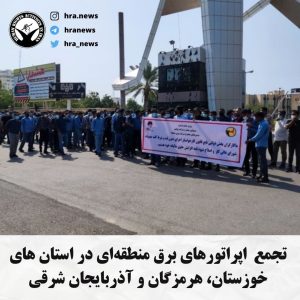 The pensioners continued their protests in Ardabil, Arak and Ahvaz. They asked to free imprisoned pensioners and levelling up pensions in accordance with Supreme Labor Council’s enactment.

A number of residents of Shadegan, Khuzestan Province, gathered before the Regional Electricity Organization to protest against frequent power blackouts.

On Sunday, August 7, the volunteer firefighters of the NGO Anjoman Sabz Chia gathered before the Governor’s office in Mariwan to protest against the local authorities’ inattention to recent wildfires. 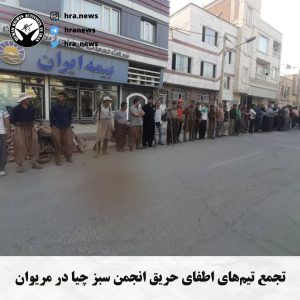 The following is an overview of human rights violations in Iran on January 13th, 2019 based on the information compiled and verified by Human Rights Activists News Agency (HRANA).

(4) Three university students were burnt because of a faulty stove due to dormitory’s authorities negligence in maintenance in Hormozgan province.

(5) Three Baloch citizens, Mohammad Damani, Akhtar Askani, and Morad Bakhsh Askani, who were arrested on December 15, were released on bail. They were arrested in Qasr-e Qand city after the Chabahar attack.

(6) Ali Vaseghi and Asgar Akbarzadeh, Azerbaijani Turkic minority rights activists, were summoned to the Ardabil Revolutionary Court on January 23. They were charged with ‘forming an illegal group to disrupt national security’.

(8) A worker activist, Ezzat Nasri, was released from Saqqez prison after finished serving his 3-month imprisonment sentence. He was arrested on November 27th with the charge of ‘propaganda against the state’.

(9) Two residents of Ahvaz, Sami Sagouri and Abdelghader Delfi, were arrested by the security forces and transferred to an unknown place. The reason of their arrest and their whereabouts are still unknown.

(10) A Baha’i citizen, Maria Kosari, was exonerated in the appeal court in Kurdistan province. She was sentenced to one-year imprisonment and two years exile.

(11) Amir Hossein Mohammadifar and Sanaz Allahyari who were arrested by the security forces on January 9, have been transferred to the Ahvaz intelligence detention center. They were working as editors of “Gam” journal.

(12) Three prisoners were publicly executed in Yasuj today. They were charged with ‘moharebeh through ‘armed robbery’. In 2018, at least 236 people have been executed and 195 people have been sentenced to death in Iran.

(13) The workers of municipality of Marivan have at least six months of unpaid wages.

(14) Hamid Babaei, a detained student who is serving his six years imprisonment sentence, has been granted a furlough. He was a Ph.D. student in finance at Liège University in Belgium when he was summoned to the Intelligence Ministry while visiting his family in Iran in August 2013. According to Hrana, he is married and was born on 11th December 1983 in the city of Takab, in West Azerbaijan province. He was graduated in mathematics from Sharif University in 2006 and the same year to follow a master’s degree in Industrial Engineering Science was accepted in Technology University of Iran. The relatives of Babaei have said that he has not had any political activity during his stay abroad and only because of rejecting the request of Ministry of Intelligence upon cooperating with them, he has been arrested.

(15) The administrators of a popular Telegram channel were arrested by security forces in Omidiyeh. They were accused of publishing classified information.

(16) Three Baha’i-owned businesses have been forcefully kept closed in Khoramshahr, during the last two months.

(17) The chairman of city council of Yazd was sentenced to 37 lashes and paying fines on the charge of ‘distributing falsehood’. Gholamali Sefid, supported, Sepanta Niknam Zoroastrian councilor who had been suspended from his post due to his faith.

(18) Four workers died and two have been injured in the cities of Nur, Rafsanjan, and Tehran because of negligence in the oversight of safety conditions.

(19) Four prisoners were spared from hanging on gallows by the consent of next of kin in Kermanshah. They were accused of murder in 2010.

(20) A landmine explosion severely injured a 34-year old man in the city of Dehloran. Moreover, another landmine explosion injured a landmine disarming agent in Mehran city. More than 42 thousand square kilometers of he lands in the Iran ‘s western provinces contain landmines left from the Iran-Iraq war. Dehloran and Mehran cities are in Ilam province.

The following is an overview of human rights violations in Iran on December 22nd, 2018 based on the information compiled and verified by Human Rights Activists News Agency (HRANA).

(2) A ranger was severely injured in a fight against poachers in Gilan-e Gharb, a city in Kermanshah province.

(3) A businessman, Hamid Reza Bagheri Dermani, also known as the Sultan of Bitumen, was executed on December 21, 2018. He was accused of ‘Spreading corruption on Earth’, fraud, bribery, and embezzlement.

(4) A labor activist, Khalil Karimi, was sentenced to one-year imprisonment in the Sanandaj Revolutionary Court. He was charged with ‘propaganda against the State’, participating in the International Labor Day, and taking part in the International Campaign of No to Execution in Iran.

(5) Saber Naderi was arrested and transferred to Sanandaj prison on December 19 to begin serving his Sentence. He faced four years in prison on charge of ‘acting against national security’.

(6) More than 130 thousand 5-11-year-old children are deprived from going to school in the school year of 2018-2019. Moreover, 30% of them belong to Sistan and Baluchestan which has the highest rate among provinces.

(8) More than 35 workers of Tabriz Bearing Manufacturer have four months unpaid wages. Tabriz is the city of East Azerbaijan Province.

(10) Vahid Jahangiri who has been accused of murder in 2011, was executed in Isfahan on December 17. Another prisoner who was accused of murdering a five-year-old girl, Melika, was executed on December 21, 2018 in Falavarjan. And finally, a prisoner charged with murder who was held in Tehran prison was saved from death with forgiveness and consent of the next of kin at the gallows.

(12) Three construction workers were injured due to an unsafe workplace in Hajiabad city in the Hormozgan province.