Protestors Arrested in front of Rajai Shahr Prison of Karaj 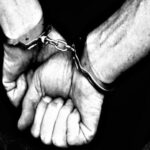 HRANA News Agency – While the situation of detainees in hall 10 of Rajai Shahr prison still remains unclear, a number of civil activists were also present in front of the prison to show their solidarity with them on September 13, 2017. The peaceful presence of these activists was drawn to violence by police forces and some were arrested.

According to the report of Human Rights Activists News Agency in Iran (HRANA), a number of civil activists were also present in front of Rajai Shahr prison On September 13, 2017, at the same time with the day of the meeting of prisoners in hall 10 who are in a critical and tense situation since August. END_OF_DOCUMENT_TOKEN_TO_BE_REPLACED