According to HRANA, the news agency of Human Rights Activists, at the time of arrest, they also searched the house and confiscated several family belongings such as identity cards, passports, cell phones, pictures and books related to the Baha’i faith. While Baha’i citizen, Pedram Abahar is still in detention in an unidentified detention center, his house in Tehran was searched by security forces again on Tuesday.

“On Sunday morning, November 21, at 10 am., Mr. Abhar departed from Shiraz to Bushehr,” an informed source told HRANA. “While he was at a rest stop on the road, he was surrounded by three cars. They arrested and transferred him back to his parents’ home in Shiraz. About 13 security agents searched the house. Yesterday, his parents went to the courthouse to find out about their son. However, they did not get an answer. Finally, this morning, Mr. Abhar was allowed to make a short call to his parent.”

Regarding this report, HRA Senior Advocacy Coordinator Skylar Thompson stated that HRA strongly condemned these discriminatory acts against religious minorities in Iran. She asked that the regime take action to ensure Iranian people, and Bahai’s citizens in particular, are entitled to the freedom of religion and can perform their religious acts freely.

The reason for Abhar’s arrest, the charges against him, the security institution responsible for the arrest, and the detainee’s whereabouts are all unknown as of this writing. 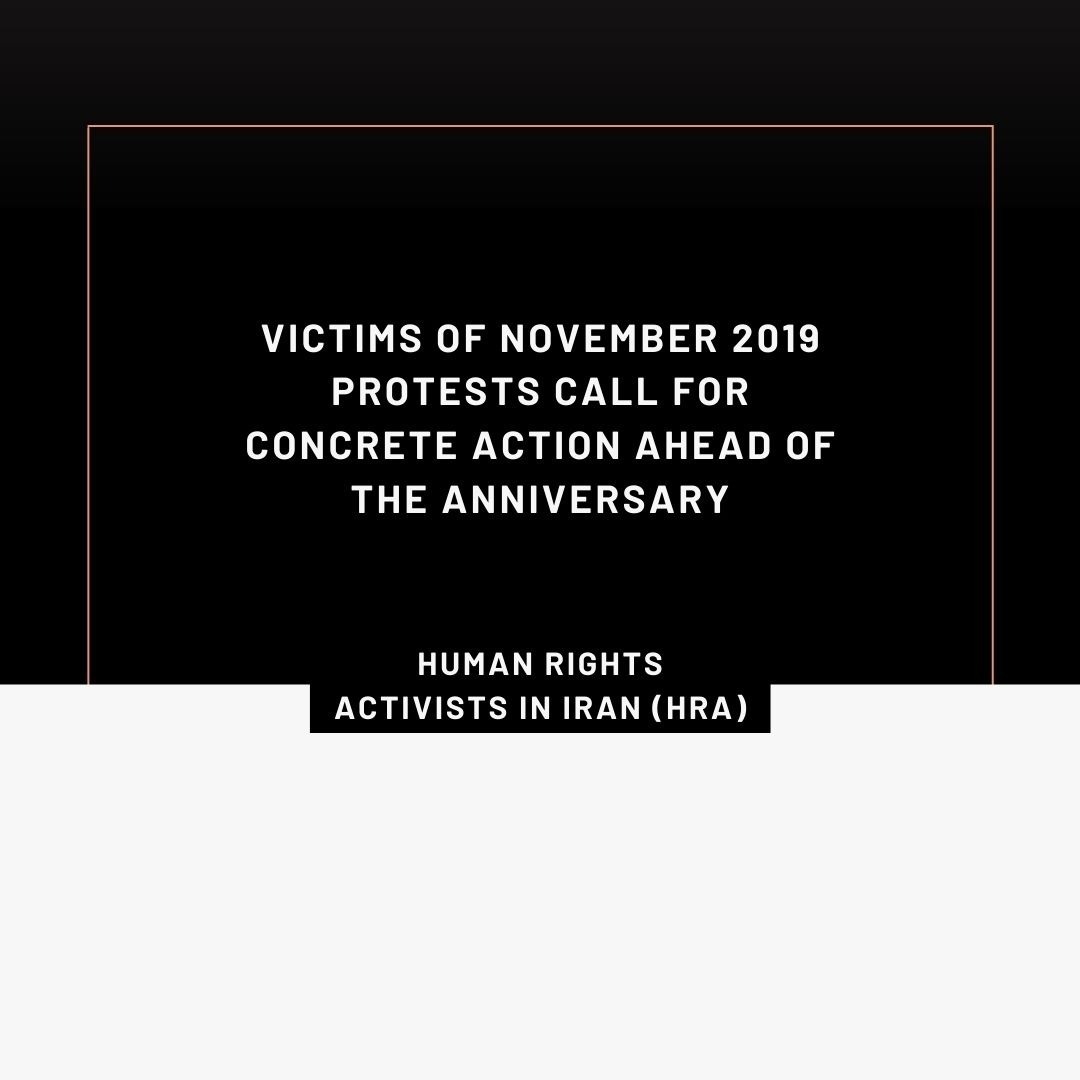 NOVEMBER 15, 2019: A sudden and substantial hike in the cost of fuel sparks unrest across Iran. Individuals across the country pour into the streets in what soon becomes mass protests covering a reported 104 cities across Iran.

As the anniversary of the November protests approaches, HRA has spoken with Iranians calling for concrete action against those responsible for violent crackdowns against protesters including arbitrary and incommunicado detention, illegal use of force, and torture among other serious violations. For nearly two years, perpetrators have, for the most part, enjoyed widespread impunity. Domestically, some have even seemingly been rewarded. Indeed, individuals such as now-President Ebrahim Raisi, a known and serious violator, have risen to top positions of power.

Soheila, a 45-year-old mother whose son was shot in the November 2019 protests, highlights the shortcomings of the judiciary in Iran, telling HRA, “I hope that accountability will mean that next time, my child, instead of taking to the streets, can work through established pathways to hold corrupt people accountable for their actions.”

November 2019 saw the deaths of several hundred Iranians  (227 were verified by HRA) in what is arguably a state-sanctioned arbitrary deprivation of life. In addition over 7,100 were arbitrarily detained, some remain detained today. Although the violations noted above have been extensively documented, little has been done to hold perpetrators accountable.

Elika, 25, told HRA, “Without accountability for violations that occurred in November 2019, the cycle of repression and violence will not end. Those that intend to perpetrate future abuse [on us] need to see accountability. Maybe then they will take a moment to think before pulling the trigger.”  In a recent post in the Atlantic Council IranSource blog, Skylar Thompson, HRA Senior Advocacy Coordinator, stated similarly, “Without concrete action to fight the plague of impunity that covers Iran, these violent events will only continue to occur and the Iranian people will continue to suffer.”

Iran has proven unwilling to investigate and prosecute those responsible through domestic judicial frameworks. This unwillingness is paired with the fact that Iran’s judiciary is in no way impartial and is in fact led by the very perpetrators responsible for the noted violations. Unfortunately, violations of fair trial standards have become status quo.

When asked what accountability looks like to him, Hafez, 22, told HRA, “They should handcuff the perpetrators. […]. They should be prosecuted in a public court and imprisoned.” He continued, “Once handcuffed, perpetrators should have to look the victim’s mother in the face to calm her heart.” Nazanin, 32, told HRA that accountability, in her view “is [the Islamic Republic] honestly and openly admitting wrongdoing.”

HRA has identified 54 individual and seven institutional violators connected to the November 2019 protests. It Is noteworthy that a number of those violators have also been complicit in numerous additional acts of repression against protesters including in 1988, 2020 (protests over the shooting down of Ukrainian airliner), 2021 (protests over resource mis-management in Khuzestan), and many instances in between. This repeated action is a direct consequence of the lack of accountability.

The following section lists notable individuals responsible for repeated serious and widespread rights violations. Extensive and credible documentation is readily available. HRA calls on the international community to hear the pleas of Iranians like Hafez, Nazanin, and Elika and utilize available documentation to take concrete action against those responsible.

*For a more in-depth look at the listed violators visit www.spreadingjustice.org or select a name and be directed to a violator profile that includes several data points including an overview of violations, employment history, as well as additional evidentiary documentation.

Hossein AshtariFard
Commander of the police force of the Islamic Republic

Gholamreza Jafari
From November 12, 2019 to now: Commander of the Hormozgan Police Force

Hassan Karami
Command of the Special Unit of the Police Force

Hossein Salami
Commander-in-Chief of the IRGC

Mahamad-Reza Amouzad Khalili
Judge, Head of Branch 24 of the Revolutionary Court of Tehran

Seyed-Ahmad Zargar
Judge of the Islamic Revolutionary Tribunal of Tehran

Iman Afshari
Judge, Head of Branch 26 of the Revolutionary Court of Tehran 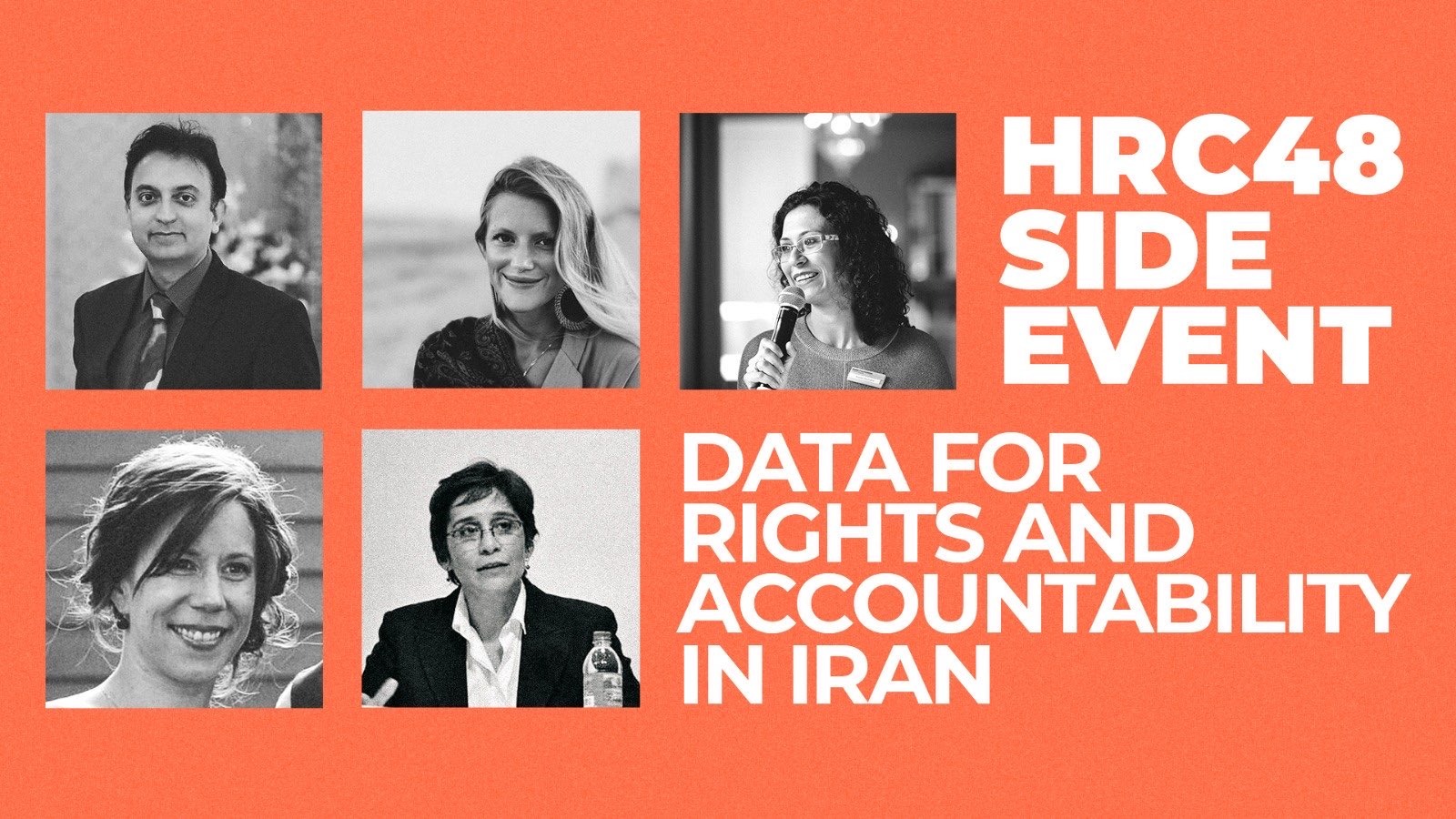 On September 21st, a number of prominent human rights organizations, including HRA, Impact Iran, HURIDOCS, and the Abdorrahman Boroumand Foundation , hosted a virtual discussion in the margins of the 48th session of the United Nations Human Rights Council on how online databases can help monitor human rights in Iran and support accountability efforts.

In an announcement of the event, Impact Iran stated, ​​”In recent years, human rights organizations have developed a range of online tools that have strengthened the capacities of rights defenders to advance evidence-based reporting and advocacy aimed at generating a culture of accountability and transparency in pursuit of the realization of human rights for all persons.”

United Nations Special Rapporteur on the situation of human rights in Iran Dr. Javid Rehman delivered the event’s opening remarks, in which he highlighted the important work of the organizations represented by the panel. He mentioned Abdorrahman Boroumand Center’s OMID Memorial, the Spreading Justice’s Initiative by Human Rights Activists in Iran, and Impact Iran’s Iran Rights Index, which is a culmination of work by the Impact Iran Secretariat and coalition members including HRA.

“The individual characteristics of the different databases that are the topic of discussion today… all indicate that civil society organizations have clear goals in their well-coordinated documentation efforts,” Rehman stated. “Each of these databases serves a valuable goal for public information advocacy, memorialization, or support accountability mechanisms.”

In demonstrating how HRA’s Spreading Justice database can contribute to accountability efforts, panelist and HRA Senior Advocacy Coordinator Skylar Thompson outlined the functions and goals of the project.

“Spreading justice is a database of Iranian Human Rights violators, both individual and institutional violators,” Thompson said. “This database, which is available in both English and Farsi, currently contains over 250 profiles, ranging from Iranian president Ibraham Raisi himself to lesser known violators that continually commit heinous acts, and yet fly almost silently under the radar.”

On the functions of the database, Thompson said,  “If an individual were doing research on an individual victim’s case, they could, for example, search Nazanin Ratcliffe and find all violators associated with her case.”

“The information that is collected through this network is extremely important to our work,” Thompson said. “It also gives us unparalleled access to victims.”

On the use of the database, Thompson stated that there is a real need for governments to work alongside civil society, in their efforts to hold perpetrators accountable, and added that this was a core motivation behind the development of Spreading Justice.

She continued, “If we can begin to close the accountability gap in Iran, we will begin to see a disruption in the continuous cycle of abuse,” Thompson said. “The truth is that the international community has a number of tools available to hold perpetrators of serious human rights violations accountable, particularly when domestic judicial remedies are unavailable, such as is the case in Iran. The use of these tools is lacking.”