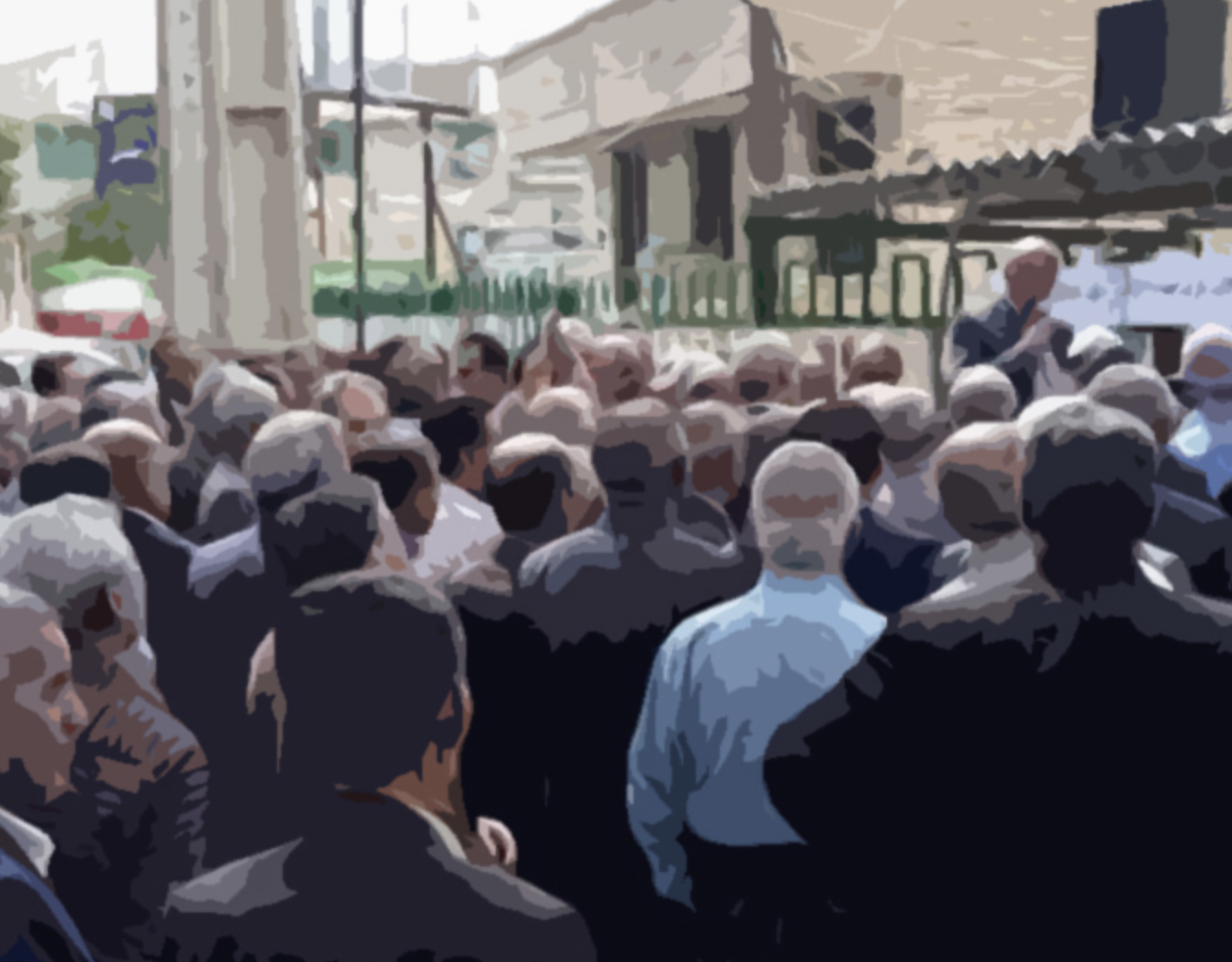 Several workers working on the Shafa Rud dam assembled at their workplace to protest against job uncertainty and a months-long delay in payment. As one of these workers stated, they have not received wages in six months.  About 900 workers who are working on this dam have been suspended from work due to the company’s financial problems. 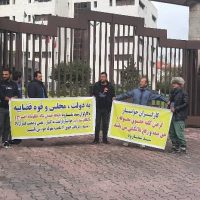 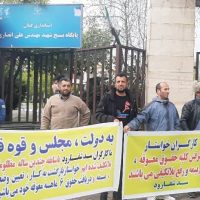 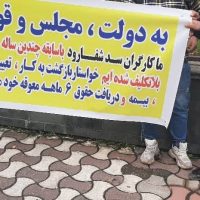 A group of personnel of the Islamic Azad University in Mahshahr City protested their wagesby spreading empty tablecloths as a sign of their hard livelihood conditions. Onestated that they have long been denied payment under the pretext of a funding shortage. 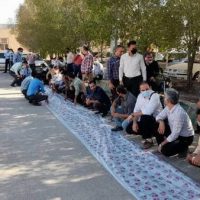 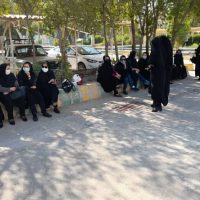 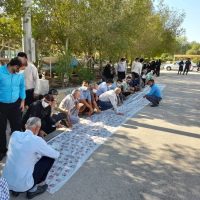 A group of retirees of Haft-Tappeh Complex protested in front of the Ministry of Cooperatives, Labor and Social Welfare Office in Shush city. They stated that their pension income has not been fully paid in accordance with Social Security Act. 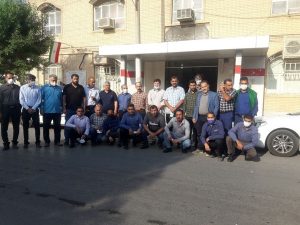 A number of farmers in Bavi County assembled in front of the building of the company Karun-e-Bozorg, an operation and maintenance of Irrigation and Drainage Networks, to ask for their water portion for wheat cultivation. They also protested against the cut in the water supply for their gardens.

A group of workers of Kerman Coal Mining Company went on strike and assembled at their workplace to protest against assigning the stock management to the company Dalahu Tejarat. They will oppose any changes in stock management until they have taken formal employment with the company.

The workers of Iran-Khodro in Tabriz went on strike at work to demand delayed payments and benefits.

A number of retirees and pensioners of the Khuzestan Social Security Organization protested in front of the building of the organization in Ahvaz city. They asked for levelling up pensions to stand above the poverty line, closing the disparity in pension incomes, enforcing article 96 of the Social Security Act, solving issues regarding supplementary insurance, paying end-of-year bonuses and factoring in employment history in hazardous jobs for calculating pension income. 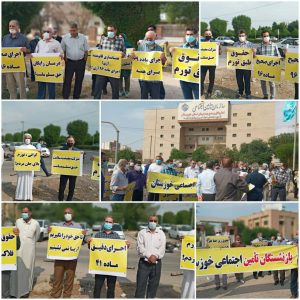 A group of designers and supervising engineers assembled in front of the Iran Ministry of Roads & Urban Development to protest the enactment of new regulations and procedures which, as the protestors claim, would be devastating for companies in this sector.

Retirees and pensioners of Fulad Steel Company assembled in front of the company’s pension fund departments in Isfahan and Ahvaz. They asked that their pensions be raised above the poverty line, closing the disparity in pension incomes and addressing supplementary insurance issues. 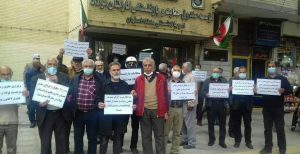 A group of personnel of the Social Security Organization assembled in front of the parliament in Tehran. They demanded implementation of the Hard and Hazardous Jobs Act, which requires that military service periods and job hardship records be taken into account when raising wages.

A number of victims of the financial fraud of the cryptocurrency exchange “Cryptoland” assembled in front of the Judiciary Building and demanded their lost money.

A number of depositors who has lost their investment through Caspian institution assembled and protested in front of the building of the Central Bank in Tehran.

A number of retirees of Haft-Tappeh Company who went into a pension in 2020 assembled in front of the Ministry of Cooperatives, Labor and Social welfare office in Shush city. They claimed that their pension income has been accounted for less than what the social security act requires. 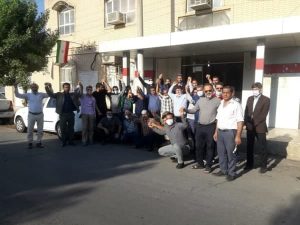 In Tehran, a group of citizens who had pre-ordered cars from Ramak Khodro Company assembled in front of the Tehran Courthouse to ask for a demand accountability from the company, which has failed to deliver their cars after four years.

Dozens of citizens from Lorestan County in Fars province traveled to Tehran and assembled in front of the building of the Iran Ministry of Roads & Urban Development. They asked for maintenance of the unsafe and poor conditions of the road connecting Jahrom to Bandar-e Abbas. This road is still not two-lane, which has caused many fatal car accidents in recent weeks. 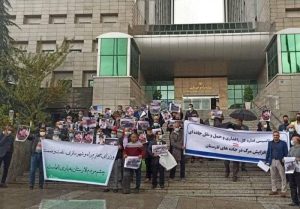 In Isfahan, a group of farmers assembled in front of the headquarter of the Islamic Republic of Iran Broadcasting. Moreover, several other farmers marched in the streets of this city. They protested against not receiving their water portion for the fall wheat crop planting.

In Tabriz, the workers of SEMET Company assembled in protest in front of the company manager’s office.

In Kerman, a number of workers of Kerman coal company assembled in front of the office of the Ministry of Cooperatives, Labour, and Social Welfare to protest against the privatization of the company. 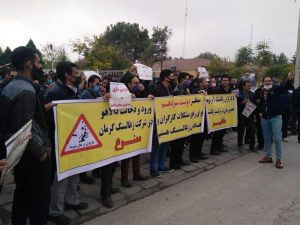 Dozens of retired teachers and educators who have been on pension since 2020 assembled in front of the building of the Planning and Budget Organization in Tehran. They demanded payment of their pension bonuses. The protest turned violent by police interference.

A group of livestock farmers in the Toroq area in Mashhad assembled to protest against the demolition of several animal farms.

For the second consecutive day, in Isfahan, farmers assembled in front of the building of the Regional Water Company and marched in the streets.

For the third consecutive day, in Isfahan, a number of farmers assembled in the dried up stretches of the river Zayandeh-rud to ask for their water portion. In response, the member parliament Abas Moghtadai promised that to address their issue, along with other Isfahan members of parliament, he would have a meeting with the president.

A number of landowners in Astalak Pardis protested in front of the building of the Tehran Ministry of Roads & Urban Development. They claimed that their lands have been confiscated by the company Omran-Pardis.

In Khorasan province, a group of Iran-Khodro workers went on a strike to protest against forced overwork and ask for raising wages.

For the second consecutive day, to ask for addressing their work issues, a group of preschool educators assembled and spent the night in front of the building governorate building.

In response to the call of the Coordinating Council of Iranian teacher Unions, both retired and working teachers in 67 cities across the country assembled and protested. As their most important demand, they asked for the implementation of the Ranking Income Bill, whereby the salaries of teachers should be raised to at least 80% of university board members’ salaries. 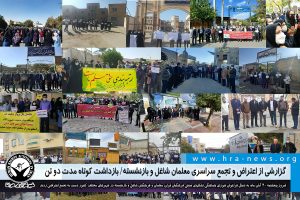 On the same day of nationwide teachers’ protest, in Isfahan, the school concierges and service workers assembled in the front of the building of the Department of Education to ask for their demands.

For the third consecutive day, in Isfahan, the farmers assembled in the dried up stretches of the river Zayandeh-rud.