On July 6, 2019, the revolutionary Court of Birjand sentenced nine Baha’i residents of this city to 54 years imprisonment, combined. According to this verdict, each of them was sentenced to six-year prison term. Also, the funds raised during a religious ceremony by the Baha’i community for needs of Baha’i residents of Birjand, was confiscated by the court’s order. Their court hearing was on July 3, 2019 without their lawyer, Mazdak Etemadzadeh, because of the article 48 of the Islamic Penal Code of Iran and he is not in the list of government-approved lawyers. These Baha’i citizens were arrested earlier in 2017 and were released on bail after a while.

Sheida Abedi, Firouz Ahmadi, Khalil Maleki, Simin Mohammadi, Bijan Ahmadi, Maryam Mokhtari, Saghar Mohammadi, Sohrab Malaki, and Bahman Salehi were sentenced to six years imprisonment, each for the charges of “membership in illegal and against the national security Baha’i group” and “propaganda against the state by promoting Bahaism”.

Between 9-15 June 2019, the houses of nine Baha’i families were searched by security forces with warrant in Shahin Shahr. Cell phones, laptops, tablets, satellite devices, books, photos, pictorial carpets, identification documents, and working tools were confiscated. These citizens, along three other Baha’i citizens, were summoned by the judicial authorities.

More than 300,000 Baha’is live in Iran. Iran’s constitution, however, recognizes only Islam, Christianity, Judaism, and Zoroastrianism, and does not acknowledge the Baha’i faith as an official religion. Consequently, the rights of Baha’is are systematically violated in Iran.

A Daily Overview of Human Rights Violations in Iran for January 31, 2019

The following is an overview of human rights violations in Iran on January 31st, 2019 based on the information compiled and verified by Human Rights Activists News Agency (HRANA).

(1) Arash Sadeghi, a detained civil rights activist, was deprived from medical care which health professionals have said he desperately requires. He is suffering from bone cancer and infection in a surgical wound on his arm. Also, he has an urgent need for chemotherapy.

(2) Of the one million phone calls the Emergency Social Services Hotline received last year, 21 thousand were regarding child abuse and domestic violence.

(3) Saba Kord-Afshar and Yasaman Aryani, political prisoners, wrote an open letter reacting to a newspaper article that described the political prisoners’ conditions ‘favorable’, giving an overview of the hardship they face in the Evin’s women’s ward.

(4) The director of the Department of Environment of Tabas announced that two poachers were arrested in Tabas city along with a carcass of a chinkara.

(5) Parvin Mohammadi, a labor activist and the vice-president of the Free Union of Workers in Iran, was transferred to the Kachoui prison in Karaj to serve her one-month detention. She was arrested on January 29.

(6) Mohammad Ali Zahmatkesh, a teacher’s rights activist in Shiraz, was sentenced to two years imprisonment and one year of exile. His accusations are  “propaganda against the state” and “insulting the Founder of the Islamic Republic”.

(7) Shahin Barzegar, an Azerbaijani Turkic minority rights activist, began his three-months imprisonment sentence in the Tabriz prison. His charge was attending the funeral ceremony of a former prisoner, Hasan Damirchi.

(8) Soroush Agahi, a Baha’i prisoner of the Evin prison, was released on bail. He and Neda Shabani, another Baha’i citizen, have been arrested in Karaj on November 28, 2018.

(9) Amnesty International requested the release of Iranian labor activists Esmail Bakhshi and Sepideh Gholian who spoke out about abuse and torture they suffered in detention. They have been rearrested and are at risk of severe torture.

(10) A prisoner was executed in Nowshahr and a 24-year old was sentenced to death in Birjand. A prisoner who was accused of murder, was spared from hanging on gallows by consent of next of kin in Karun after 12-year in prison.

(11) A member of Iranian Parliament representing Nishabur, Hajar Chenarani, confirmed that 200 workers of Khorasan Exhaust Manufacturing Company have been laid off.

(12) A 66-year old Christian converted, Esmail Maghrebi-Nejad, was arrested by security forces in Shiraz on January 15 and his whereabouts is still unknown. His home was raided, and his belongings confiscated.

(13) Saeed Sadeghifar ,an Azerbaijani Turkic minority rights activist, was released on bail. The security forces on Tuesday, arrested him in Ardabil. His court was on January 24, on the charge of “establishing illegal groups with the intention to disturbing national security”.

A Daily Overview of Human Rights Violations in Iran for January 19, 2019

The following is an overview of human rights violations in Iran on January 19th, 2019 based on the information compiled and verified by Human Rights Activists News Agency (HRANA).

(1) Two Baha’i citizens, Kimia Mostafavi and Kiana Rezvani, have been arrested in Kerman. Their whereabouts are still unknown.

(2) A landmine explosion injured Hadid Babajani, a 19-year-old Kulbar (Kurdish back carrier), in Ravansar city in the Kermanshah province.

(3) Two workers of Iran National Steel Industrial Group (NSIG) in Ahvaz, Karim Sayahi and Tarogh Khalafi, were released after two months. More than 43 workers of NSIG have been arrested on December 16, 2018.

(4) A student transporting vehicle crashed leaving four students injured in Tehran. Similar incidents had happened in Qaleh Ganj and Ekhtiarabad in Kerman province on January 15 and 16.

(6) Two detained labor activists, Behnam Ebrahimzadeh and Arsham Rezaei have their bonds set at 200 million Toman [approximately 20 thousand USD] each. Ebrahimzadeh was arrested last month and he had been released from prison last year after finishing his seven years sentence.

(7) Masoud Shamsnejad, a lawyer and professor, was arrested and transferred to Urmia prison while the security guards raided his home and confiscated his belongings. He was accused of “propaganda against the state” due to being a lawyer of his clients.

(8) A worker died of electrocution in Tehran and another worker fatally fell in Zahedan, because of negligence in the oversight of safety conditions.

(9) Four employees of a news website, Sunni News, were summoned to the Revolutionary Court in Zahedan. Sunni News discusses the Sunni Islam beliefs and rituals with respect to the other religions.

(10) The workers of Khuzestan Pipe Industrial Company have more than 15 months unpaid wages and 11 months unpaid insurance fee owed by the employer.

(11) Two environmentalists have been arrested in Sanandaj city in Kurdistan province. Edris Mohammadi and Avat Karami were arrested for an unknown reason and their whereabouts are still unknown.

(12) More than three protests were organized in Iran on January 19, 2019. Municipality workers in Borujerd, several people in Sistan and Baluchestan, and the workers of Ahvaz inter-city rail, have held separate protests to demand their requests. 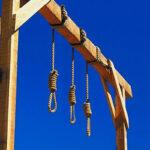 Human Rights Activist News Agency (HRANA) – Six years ago, four Afghan nationals planned to use underground channels to migrate to Iran, where they had invested hopes of a better life. In the early morning hours of October 2, 2018, they were executed on charges of “armed drug trafficking,” a charge to which they reportedly confessed under the duress of torture.

In an open letter, the prisoners explained the circumstances in which they were detained and coerced to utter false confessions. Mohammad Miran Zehi wrote that they had filed into a Toyota set to take them to Birjand from Zabul when they got into a dispute with their driver near the village of Bandan [a tributary of Nahbandan on the Afghanistan-Southern Khorasan border]. Claiming he needed gas, he reportedly dropped the group off at a private residence and said he would be back.

“When [the driver] returned, he was flanked by authorities. They struck me in the head and took us to the Bandan police station. They subjected us to the cruelest forms of torture in there,” Mohammad Miran Zehi said.

Accusing them of transporting more than 300 pounds of opium and two Kalashnikov rifles, Bandar authorities used violence to press them to confess, going as far as pulling a toenail from Mohammad’s right foot.

The case file against the four was set into motion when they finally acceded to the torturers’ demands, “under the pressure, the fear for our lives, the inability to take it any longer, and hoping that maybe it would make them stop,” their letter explained.

According to a close source, the group was made scapegoats for an armed conflict that had taken the life of a security agent days before their entry into Iran.

Birjand Central Prison is in the city of Birjand, capital of Southern Khorasan Province. 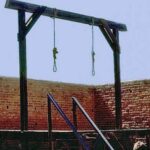 HRANA News Agency – Five men and two women were executed in connection with drug crimes in the central prison of Birjand on Thursday.

According to the report of Human Rights Activists News Agency in Iran (HRANA), seven prisoners who had been charged with drug related crimes were hanged in the central prison of Birjand in the early morning of Thursday 14th April. END_OF_DOCUMENT_TOKEN_TO_BE_REPLACED

16 Prisoners Were Hanged in Mashhad and Birjand

HRANA News Agency – 16 prisoners with drug related charges were hanged in Mashhad and Birjand during April 16 and 17.

According to the report of Human Rights Activists News Agency (HRANA), 12 prisoners were hanged in Mashhad on April 16 and 4 others in Birjand on April 17. All of these prisoners were sentenced to death for drug related charges. END_OF_DOCUMENT_TOKEN_TO_BE_REPLACED 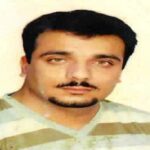 According to the report of Human Rights Activists News Agency (HRANA), on the early morning of Wednesday 12th August, Mohsen Sarani was executed by hanging in the yard of Birjand central prison with accusation of carrying drugs. END_OF_DOCUMENT_TOKEN_TO_BE_REPLACED

Execution of two prisoners in central prison of Birjand 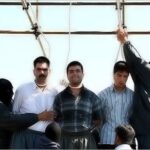 HRANA News Agency – Two prisoners who were charged with smuggling drugs, were executed by hanging, in central prison of Birjand, on August 10th.

According to the report of Human Rights Activists News Agency (HRANA), two prisoners who were charged with smuggling drugs were executed by hanging in central prison of Birjand, on Sunday night. END_OF_DOCUMENT_TOKEN_TO_BE_REPLACED

6 men and 4 women executed in Birjand 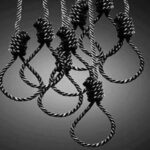 HRANA News Agency – 6 men and 4 women have been executed in the central prison of Birjand during 2 days.

According to the report of Human Rights Activists News Agency (HRANA), Sunday night 20th  June 4 men and 4 women charged with transporting and storing drugs  were executed by hanging in the yard of Birjand central prison. END_OF_DOCUMENT_TOKEN_TO_BE_REPLACED 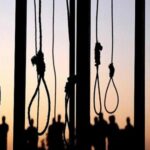 According to the report of Human Rights Activists News Agency (HRANA), 5 prisoners have been executed on charge of drug trafficking in the Central Prison of Birjand on June 19th. END_OF_DOCUMENT_TOKEN_TO_BE_REPLACED