During the last two weeks, triggered by food price hikes, nationwide protests erupted in more than 31 cities across 10 provinces. HRANA, the news agency of Human Rights Activists, has recorded 53 demonstrations so far.

According to HRANA, on Friday, May 6, 2022, following the government’s decision to cut subsidies on essential food items such as dairy products, flour, cooking oil, chicken, and eggs leading to soaring prices, the call for rallying against soaring prices went viral on social media. In the following days, several protests broke out in Khuzestan Province and soon swept through numerous cities across the country.

Prior to these protests, a series of protests and gatherings of teachers, labor workers and the retirees who had lost their pensions due to the government’s risky financial decisions had been sweeping across the country leading to dozens being arrested.

The new rounds of protests sparked initially in Susangerd City and other neighboring cities in Khuzestan Province. In the following days, at least 30 Arab-speaking citizens were arrested by security forces.

Soon after, the protests spread to other cities and provinces. The videos received from citizen journalists indicate that the protestors chanted slogans against inflation as well as the Iranian regime leaders, including President Ebrahim Raeisi and Supreme Leader Seyyed Ali Khamenei.

The map below shows the locations where the protests were. 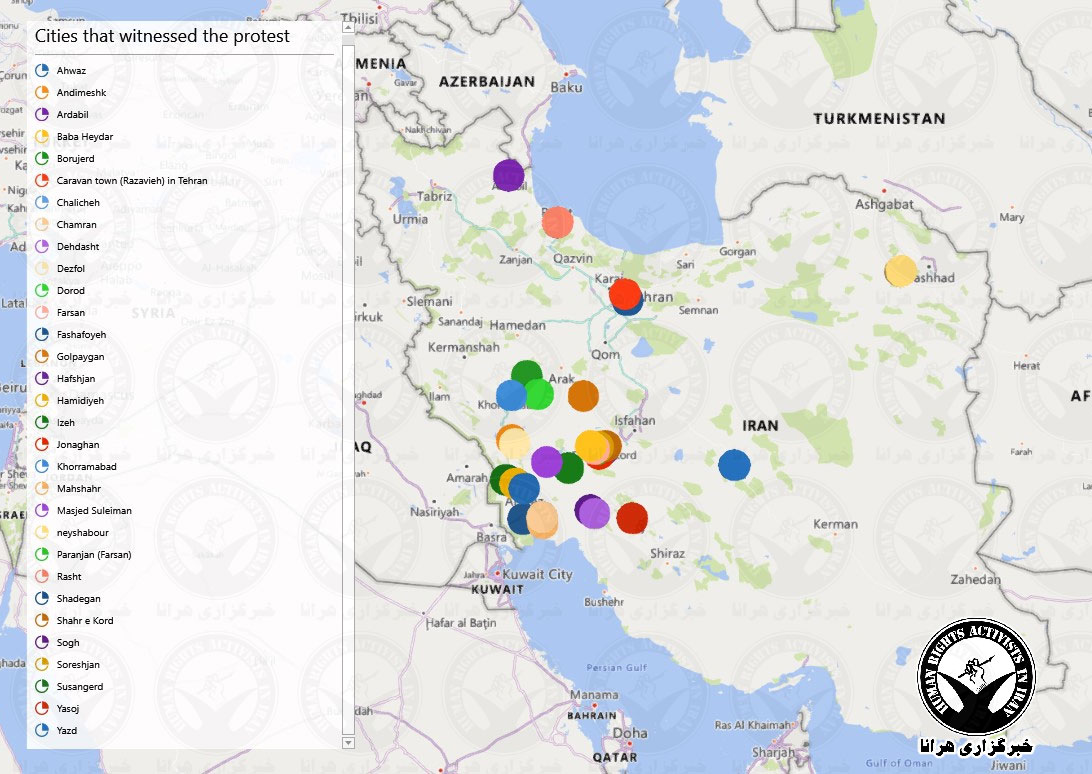 In total, 53 protests have been recorded. Moreover, 45 times, the attempts to start a protest were foiled due to the heavy presence of police and security forces in the streets.

The map below shows the locations of 53 protests and the time periods. 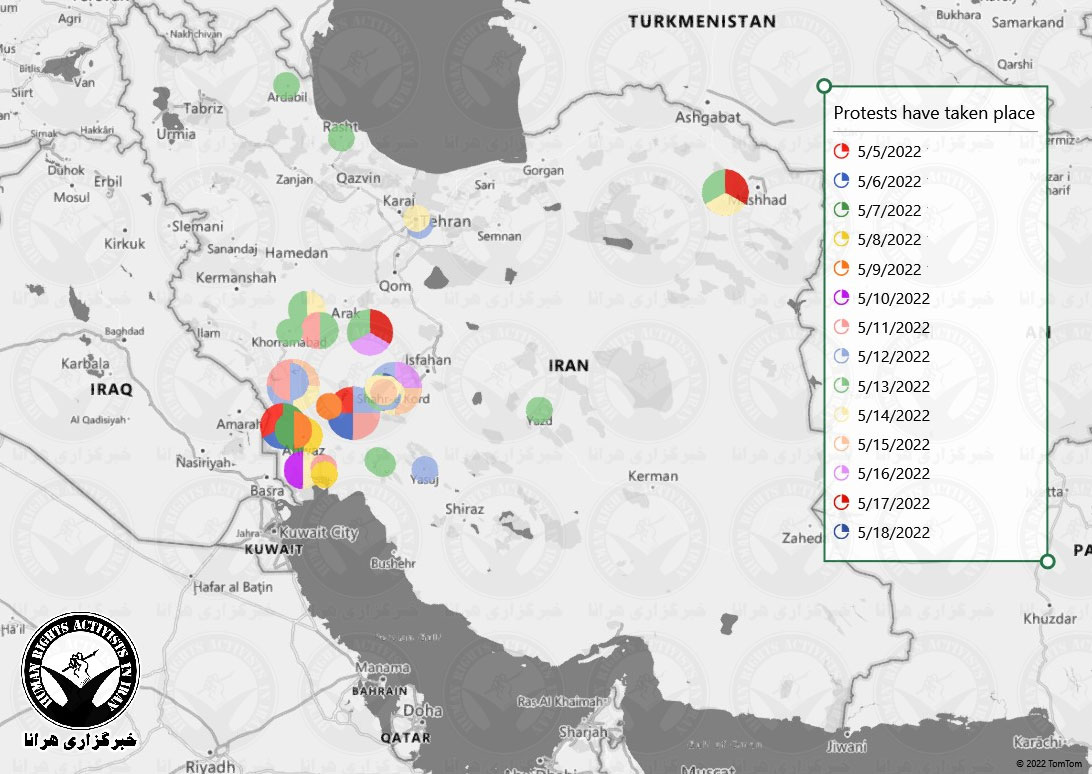 The map below shows the places where crackdowns and unrestrained shootings have been reported. 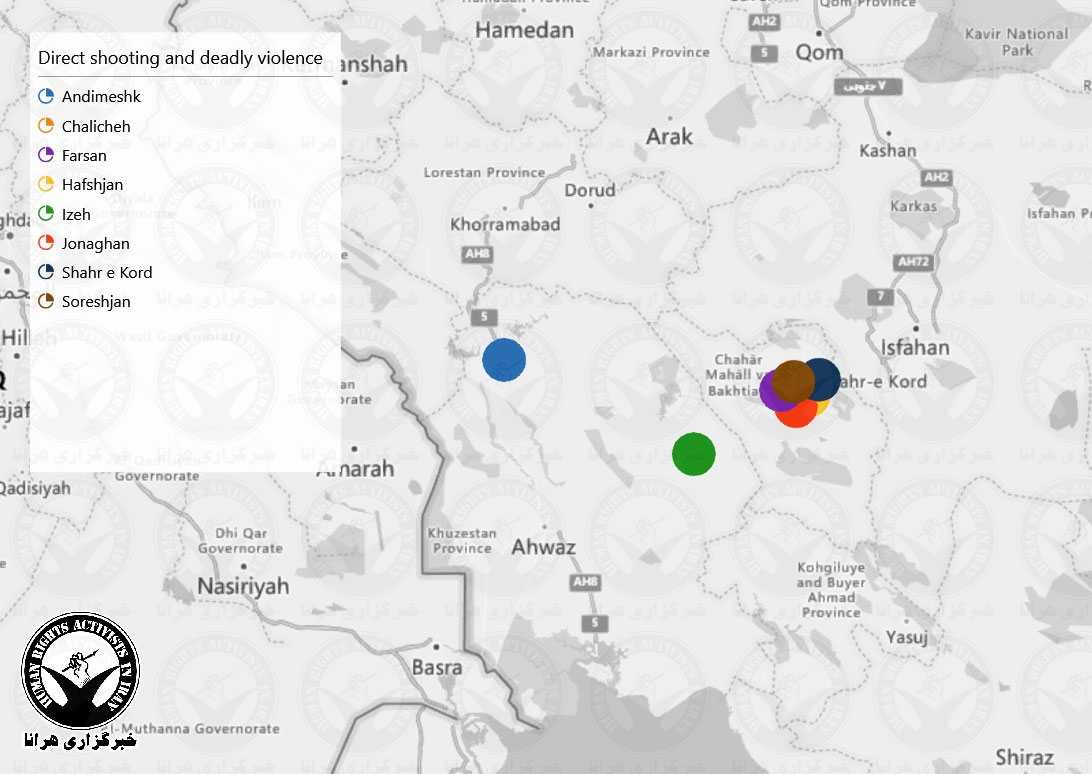 Since the beginning of the protests on Friday, May 6, the government disrupted the internet in several areas in Ahvaz in an attempt to prevent the protests. In the days that followed, Internet disruption was also reported in at least 10 cities.

In addition to intentional Internet disruption, the press was banned from covering the protests.

According to the reports obtained from local sources, at least 449 individuals were arrested during the protests.

So far, six people have been confirmed dead. These people have been identified as Pishali Ghalebi Hajivand (Dezful), Saadat Hadipour (Hafshejan), Jamshid Mokhtari Junaqani (Junaqan), Omid Soltani (Andimeshk), Hamid Ghasempour (Farsan City), and Behrooz Eslami (Babaheydar). HRANA can only confirm the reports on the death of the first two individuals mentioned above.

From all videos of protests which are circulating on social media, HRANA has verified the authenticity of 30 video reports which compilation you can watch below: 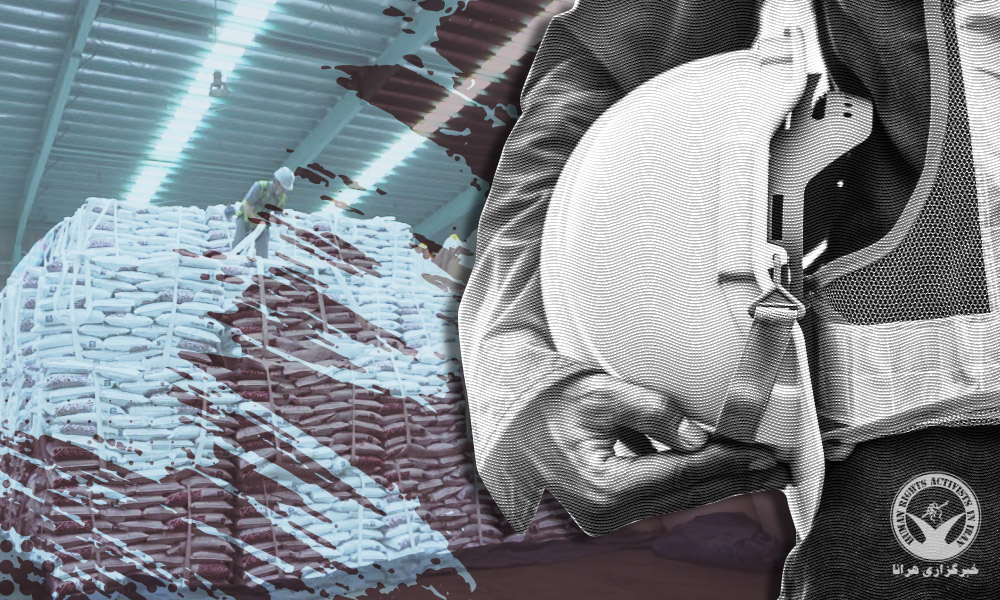